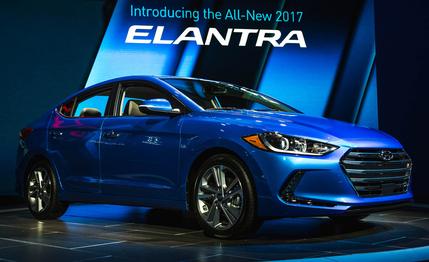 Hyundai is ushering off its months-old 2016 Hyundai Elantra to roll out the newly redesigned 2017 version, which has already earned a superior spot in several reviews in terms of safety and low emissions.

According to Car and Driver, Hyundai has added several structural reinforcements along with additional high-strength steel to the 2017 Hyundai Elantra, with an aspiration of improving crash-test performance and hence the overall safety of the car. All the more so, the company expects a top safety rating from several transport bodies.

The current Elantra's 173-hp 2.0-liter and 145-hp 1.8-liter four-cylinder engines are getting abandoned in favor of two new power plants. The limited models together with the SE models will now get their power from a 2.0 Atkinson-capable four cylinder powerhouse, with 147 hp and 132 Ib-Ft of torque.

The new engine comes with a six-speed manual in the SE models and a six-speed automatic that is optional on the SE, and standard on the limited version. For the automatic, Hyundai expects fuel-economy ratings of 38 mpg highway, 29 mpg city, and 33 mpg combined.

Soon, there will be yet another eco model with a turbocharged 128 hp, 1.4 four-cylinder engine accompanied by a seven-speed dual clutch transmission, according to Creators. Hyundai regards the model highly in terms of environmental protection.

The Ultimate packages will help commuters because of their safety aids for stop-and-go traffic, which add in pedestrian detection, automatic emergency braking, adaptive cruise control, and lane-keep assist. Even more, the included tech elements of the 2017 Elantra will improve the driving experience by employing such extras as an Android Auto or Apple CarPlay, a navigation system with an 8-inch touchscreen, heated front and rear seats, a power sunroof, and an eight-speaker Infinity Audio system.

Car analysts say that the new 2017 Hyundai Elantra has a high-value feeling when one considers its seemingly over-budget details. All the same, each car has distinguishing features, but opinions show that the added safety and eco-friendly nature are some of the details that separate the Hyundai Elantra from the rest.