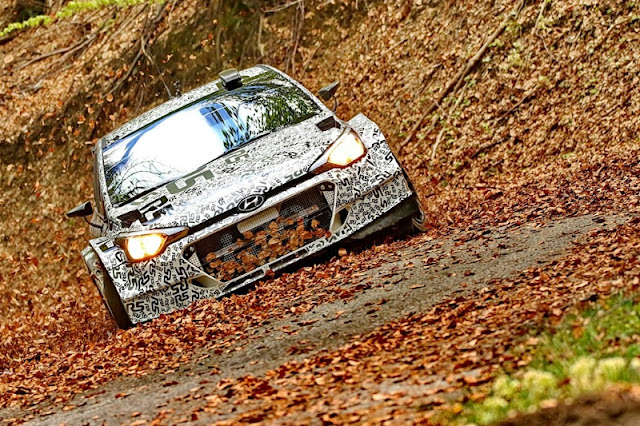 Hyundai Motorsport's testing of the 'new generation' i20 R5 moved from France to Italy for three days of running on roads south of Turin that added over 900 kilometres to its development after running for the first time on a sealed surface last month.

From a testing base in the shadow of the Alps, the team had several routes available to them. Initially Hyundai Motorsport test and development driver Kevin Abbring tackled a route of fast flowing roads as, at the same altitudes experienced on events like Rallye Monte-Carlo which called for high speeds from the engine, the team continuing to increase the performance of the 1.6-litre turbo unit fitted with a 32mm air restrictor.

The roads used on the following days provided a different test. The sweeping curves were replaced with a long sequence of hairpins that made different demands on the new i20 R5's handling. The heavy braking on the downhill tests was the perfect challenge to continue the development of the car's brakes from March's first tarmac tests.

Throughout the test the car ran with new tarmac specification gear ratios. The varied nature of the roads used will help the team develop a versatile five-speed sequential gearbox that will be competitive on the full range of tarmac events around the world. The cumulative total of running during the test, completing nearly a full WRC round distance each day, was an important step as the Customer Racing department work towards the planned homologation of the new i20 R5 in the summer.

“To have completed more than 900 kilometres of testing over three days is a great sign at this point in the 'new generation' i20 R5's development,” Hyundai Motorsport Customer Racing department manager Andrea Adamo said, “It shows that we have the car running reliably, which is of course something our customers will need when they compete on events.

“In building a car that is designed to be driven on rallies all over the world, it is important that we test on different types of stages. After the rough gravel and quick tarmac sections we were able to run on in France, the shift to Italy gave us two very different courses. It was a great setting to work on the braking system and to continue to develop the gearbox. We have a full schedule ahead of us now, with more tests to come before the homologation date in the summer and the launch of the car.”

The focus of the Customer Racing department remains in Italy for the coming weeks, with testing on both gravel and tarmac planned at a different location in May. The test team will then start to look ahead to the car's first appearance on events, while Abbring will make their first WRC start of the year on Rallye de Portugal for the Hyundai Mobis World Rally Team.

Source
Posted by Hyundai Dealer at 10:22 AM