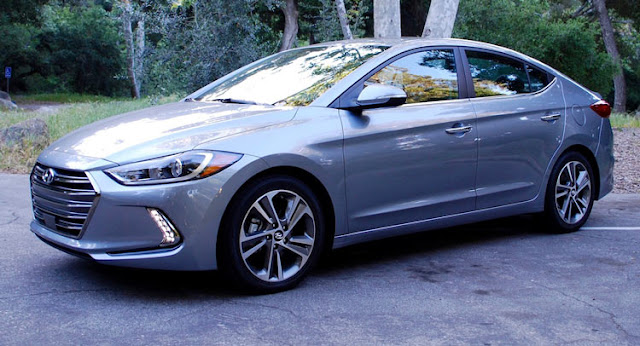 Just when you think you’ve picked out the best compact sedan, another new contender rolls up.

This is the 2017 Hyundai Elantra, and I feel like I’ve already named my picks in this class, for people who want basic transportation that doesn’t feel basic. Hyundai has been good at that over the last decade or so, and this redesigned Elantra doesn’t seem to buck that trend. But it isn’t exactly inexpensive anymore. To succeed, it needs to out-Civic the Honda Civic.

Here are some of my first impressions of the Elantra as I spend a few days driving it.

Good, clean, fun?
Hyundai continues to get exterior styling refined to the point where tasteful and bland intersect. It’s fairly anonymous, but the Elantra is at least nicely detailed. Attractive 17-inch wheels don’t overstate the abilities of a car that’s extremely comfort-oriented. But it’s hardly memorable.

Timeless might be the nice way of putting that. The Elantra also ditches every possible curve and flourish from the old car for straight edges and a somewhat blocky design. Buttons are also unusually large, which initially gives the impression this car is designed for a more mature demographic.

So easy your pre-teen grandchild can use it
The most recent Hyundai products I’ve encountered have impressed me with the completeness of the technology. This loaded Limited model gets all of the tech, including Apple CarPlay and Android Auto, on a bright 8-inch touchscreen with reasonably quick responses. Yet there are a lot of hard keys that let you accomplish most tasks easily, again, as if it weren’t designed just for Millennials. It’s all well thought out.

Save for the hands-free trunk opener. It starts beeping furiously when you stand near the trunk and then takes way longer than opening the trunk with your hand would. And people wonder what the hell is wrong with your car.

Smacked with the efficiency stick
Until the hot-ish Elantra Sport arrives, the only engine in the 2017 Elantra is a 2.0-liter four with 147 horsepower and a six-speed automatic transmission. Nothing particularly impressive, but it all works well. I didn’t expect the Elantra to be fun to drive, so it’s fine that it isn’t. But it isn’t bad to drive in normal situations and it’s at least quiet at 55-ish mph.

So far, fuel economy has been well short of the 29 city, 38 highway estimate laid out by the EPA. Eighty-or-so miles of mostly city driving got me just 21.3 mpg. We’ll see if a highway run does anything to make a better efficiency case for the Elantra.

A $27,000 value
This Hyundai Elantra Limited with all of the options comes in at $27,585, on par with a similarly equipped Honda Civic Touring and a couple grand more than a Nissan Sentra with some of this gear. The $2,500 Tech Package added the navigation, sunroof and Infinity sound system, but you have to get it to get the $1,900 Ultimate Package that includes all of the safety gear. Still, it’s an awful lot of car for the money.

But it’s also a very grown-up car for the money, something that isn’t so readily apparent among its rivals. The Elantra is aiming to be a classier compact, so I’m trying to find out if it succeeds at that mission.

What are your questions about the 2017 Elantra? Sound off below.