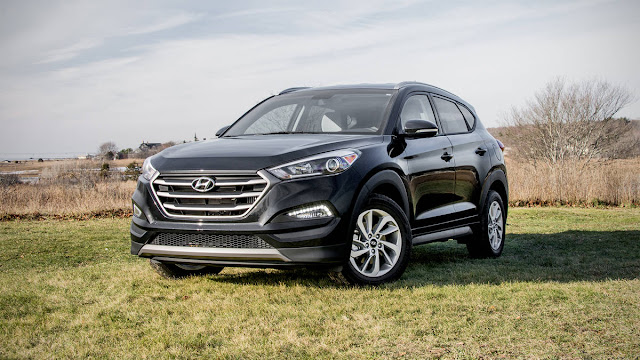 The Tucson is all new for the 2016 model year, and in re-creating one of its best-sellers, Hyundai has built an impressive crossover, parts of which should serve as a template for automakers who have been playing in this segment for a very long time.

I first drove the Tucson in 2.0-liter form back in July 2015; spending a week in a 1.6-liter model leaves me wondering if there is much need for the larger engine at all -- that’s how capable the turbocharged inline-four feels. The smaller unit pumps out 175 hp and 195 lb-ft of torque, and it’s almost as smooth and quiet as the larger engine. The Tucson offers plenty of power off the line; getting up to highway speeds, it slides quietly through the gears of the seven-speed dual clutch transmission.

Hyundai has spent a lot of time getting noise, vibration and harshness right, and it pays off in a quiet and well-proportioned cabin. Everything is within reach, nothing is out of sight, and the seating position is just right for my stature.


The only dynamic issues for which I might fault the Tucson are nosediving during braking and some slight hesitation from the DCT when starting from a standstill. I think the DCT is an OK choice here for most buyers, especially given the fact that people have to put up with CVTs from competitors in this segment, but it's not the smoothest unit out there.

Overall, the clunky dual-clutch and the budget cloth interior of the Eco model will probably drive buyers up toward the more loaded Tucson models, which do feel substantially nicer.

A lot of shoppers in this segment will inevitably find themselves between the CR-V and the Tucson because they’ve been buying the CR-V since the first Clinton administration. To me, the Tucson is by far the winner in this matchup. The engine, CVT, and driving dynamics in the CR-V are certainly worth experiencing ... just to feel the difference between the two. There's also the equally excellent Mazda CX-5, whose handling some buyers may find a little too sporty and outward visibility slightly restricted.

Economical and ecologically sound! It’s an eco double threat! Or at least that’s what I assume is the thinking here.

The small engine/DCT combo is usually a recipe for disaster. It’s nothing to write home about here, but it’s not excruciating to drive -- certainly better than a CVT. Except at lower speeds. In stop-and-go driving, you’ll experience a lot of the downsides of a dual-clutch, like clunkiness and a touchy throttle that makes nosing into a parking spot a potentially fascia-shattering proposition, without any of the supposed fuel economy benefits.

I drove moderately, usually at cruising speed and sometimes in Eco mode just for the hell of it, and returned a so-so 24.6 mpg.

But what about the other side of the eco equation -- presumably, value? If it’s here at all, it’s because the redesigned Tucson is an all-around ground-up improvement compared to its predecessor, a credible contender in the midsize CUV field. On the Eco trim, you get lots of plastic, including, unfortunately, the steering wheel, plus a tiny navigation screen with no available option for navigation or automatic climate control.

If you’re OK with living with a decade-old list of amenities, albeit in a better-designed, better-constructed and better-handling vehicle, this Tucson Eco is worth a look. I’d like to sample this in a more luxe trim at some point, just to see if I feel more strongly about it either way. 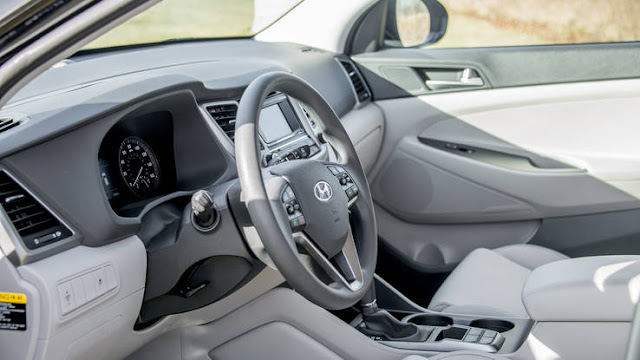 It’s gotta be tough being a product planner: America wants crossovers, but gas is at $4/gal for the foreseeable future. What do you do? If you’re Hyundai, you make an “eco” crossover and release it … just in time for the cheapest fuel in a generation. C’est la vie.

Here’s the thing: Good gas mileage is still nice, but this Tucson doesn’t really deliver it. I got mid-20 mpg figures all weekend in Normal mode, no A/C and decidedly NOT flogging it. Apparently 31 mpg is attainable on the EPA’s "downhill in a hurricane" test cycle, but even that’s nothing to write home about. At the same time, the powertrain doesn’t make you feel like you’re sacrificing anything, so in that respect go Eco -- the 1.6 delivers nice torque, and the comfort-tuned DCT takes up smoothly and shifts well.

My guess is Hyundai attempted to achieve Eco status through weight savings; specifically, by deleting any possible convenience and comfort feature from this Tucson. It’s seriously rental-car grade inside with unheated cloth seats, manual climate control and a big, black bezel around the teeny infotainment screen that reminds you what you’re missing. You get A/C, automatic headlights and…that’s about it.

Fine for a rental-car price, but for $26.5K? My advice is run, don’t walk, to your nearest Honda dealer and get a nicely loaded CR-V EX with AWD and the exact same fuel economy for just a few hundred bucks more.

As with the Sonata Eco, the DCT wasn’t the best choice. A traditional automatic would feel smoother and be more responsive than this dual-clutch (but would be less efficient -- Ed).

However, unlike the last time I was in a Tucson, I was happy to see a good-looking cabin area. It still feels on the cheap side of the midsize CUV market, but less plastic-y than before. I still want Hyundai to buy interior-colored fasteners when visible or put caps on them -- looking at you, sunvisor screws.

It feels fast enough for everyday use, but won’t set any records on the Nurburgring.

The unheated seats, and steering wheel, did make me feel like I was in an Explorer from the mid-'90s, but in an endearing way. Heck, I almost threw a copy of Dinosaur Jr’s “Without a Sound” in the CD player to bask in the '90s nostalgia, but thankfully (for my sake) didn’t.

The idea to make cost and fuel-efficient crossovers is a great one; however, as Andy pointed out, OPEC doesn’t seem to be working in Hyundai’s favor, and the 24.6 mpg that Graham achieved doesn’t make it deserving of the word eco.