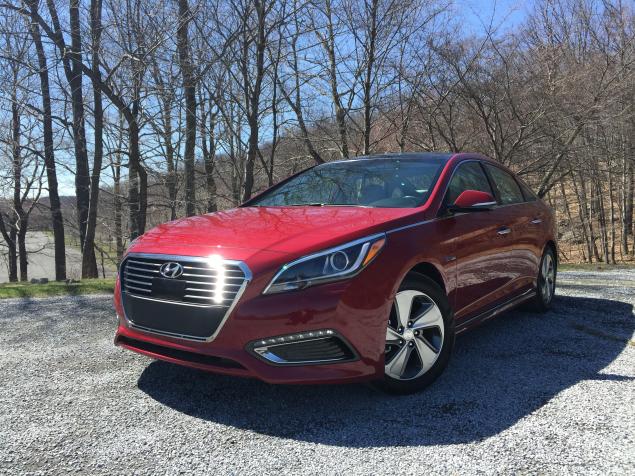 Like it or not, gas won’t stay cheap forever.

I could go on about the short-sightedness of buying a massive SUV during a fuel price slump, but maybe that rant is better suited for an op-ed than a car review.

So what is there for the fuel-conscious consumer that wants to maintain some form of normalcy? Unfortunately, many hybrids carry a stigma – images of bumper stickers and vegan food spring to mind – but the need to make more and more cars electrically-supplemented is dire, both for the planet’s sake and to meet government regulations.

Luckily, Hyundai fully understands these concerns, and they’ve put their brains together to come up with one of the least hybrid-like hybrids on the market: the 2016 Sonata Hybrid.

Hyundai lent me a Sonata Hybrid in the top-tier Limited trim for a week of driving, and the more time I spent behind the wheel, the more I grew to like it.

Ringing in at a total price of $35,765 (including $825 destination charge), it closely follows the average new car transaction price, and gives you a whole lot of benefits for your buck.

That’s a whole lot of seriously handy goodies for not much more money, but if you choose not to opt for that package, you’re not exactly handcuffing yourself.

Limited models get blind spot detection, while all trims including the base SE – which starts at $26,000 – get a rearview camera, brake assist, power fold heated mirrors, LED running lights, keyless entry and push-button start, and Bluetooth connectivity.

Finally, you don’t have to pay a massive premium just to have a usable hybrid for daily driving purposes.

One of the best features of this Hyundai, however, is something that comes standard no matter which model you get, and that’s the way it looks. Finally, automakers are starting to realize that just because a car is a hybrid, it doesn’t have to scream it at you every chance.

In fact, Hyundai was previously a big offender in this regard, with the previous generations Sonata Hybrid sporting a big trout-like face and superfluous styling cues that signaled its green intentions (Google it if you don’t believe us…).

For this go-around, it’s almost impossible to tell the difference between a gas-powered Sonata and a Hybrid, with the only telltales being a “blue drive” badge on the side, aerodynamically-friendly wheels, and clear lens taillights. For all other intents and purposes, it’s just a normal-looking car. Though almost too normal, as these eyes can barely tell the difference between the Sonata and a Subaru Legacy even when parked next to each other.

So it looks like a normal car, costs the same as a normal car, but how does it drive? Surely the hybrid powertrain takes some getting used to?

I’m happy to report that all’s normal in this department as well – better than average, even. 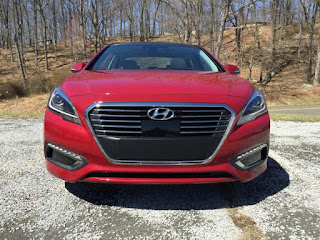 Powered by a 2.0-liter 4-cylinder and a 38 kW electric motor, the Sonata Hybrid puts out a respectable 193-horsepower (the Plug-In version makes 202-hp for all you green speed freaks). Power is routed to the front wheels via a 6-speed automatic, which, if I’m being honest, is not the best. Hyundai likes to brag that they use a traditional automatic in their hybrids as opposed to the dreaded CVT, but in this application, it falls a bit short. The transmission sometimes seems confused by the fact that it has to handle both gas and electric power, and can shift harshly or clumsily in normal driving.

Other than the gearbox, though, the Sonata Hybrid is a genuine pleasure to drive. Press the shifter-adjacent mode button and select “sport,” and happily pilot your way through your favorite country road. Steering feel is just responsive enough to be fun, and the chassis is tight and composed.

Better yet, when it’s time to hit the highway, the cabin is as smooth and quiet as an Upper West Side massage parlor (I assume). This car is almost as fun in the corners as it is serene on the freeway, and that’s praise not many Hyundai’s had received before recently.

The interior is smartly laid out, and while cheap plastics are unavoidable, a deft design strategy has placed leatherette and soft-touch materials in all the right places. The dashboard looks and feels more upscale than a Hyundai has any right to be, and rear legroom is cavernous.

Oh, and I almost forgot about fuel economy! No surprise here, but the Sonata Hybrid averages 41 mpg according to the EPA, with 39 coming in the city and 43 on the highway. Those aren’t truly stellar numbers for a hybrid, but they’re much better than what you’d find in any other traditional gas-powered sedan, and that’s Hyundai’s end game.

If there’s one drawback to the Sonata Hybrid, it’s that the rest of the hybrid midsize sedan field is filled with other great options too. Hyundai’s not the only one to figure out the “make a hybrid look normal” formula too, and strong entries in the Honda Accord Hybrid (which makes 50 mpg), Ford Fusion Hybrid and Plug-in, and the venerable Camry Hybrid make this Sonata a tough sell.

But it’s the one I’d buy, and the one you probably should too.