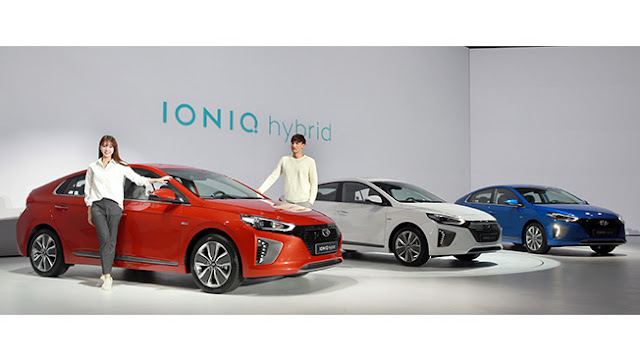 While news is pending for the U.S. market, Hyundai says its Korean-market Ioniq surpasses fuel economy for a 2015 Prius, while the jury is out in comparison to the new 2016 Prius.

It’s the regular hybrid that Hyundai says gets 22.4km/liter combined when equipped with 15-inch wheels and this edges out a Korean-market 2015 Toyota Prius Liftback’s 21.7km/liter.

The Ioniq’ figure works out to 52.7 mpg combined, the 2015 Toyota Prius’ fuel economy works out to 49.4 mpg. Astute readers may notice this Prius figure is remarkably near the Prius’ 50 mpg in the U.S., indicating how close Korean fuel economy test results are to U.S.

Unknown at this point, said Hyundai of Korea in response to questions submitted by HybridCars.com today, is whether the Korean-market Ioniq will do better than the Korean-market 2016 Prius which is still undergoing homologation testing there.

We emphasize Korean market because Hyundai’s U.S. arm adamantly stated these figures are for Korea, and U.S. EPA fuel economy info and other relevant data has yet to be disclosed, said spokesperson Derek Joyce.

Because Hyundai posted info on its Korean website today however, that much was fair game and why we got cooperation on mpg questions which are to be answered for U.S. market cars at a later date.

An Ioniq with larger 17-inch wheels is rated a bit less than the third-generation Prius at 20.4km/l city, 19.9km/l highway, 20.2km/l combined, says Hyundai of Korea.

The 2016 Prius is not for sale yet in Korea and the answer from Hyundai to the question “does Ioniq equal or beat 2016 Toyota Prius in mpg in Korea?” is unknown to Hyundai also.

“We don’t know yet,” said a Hyundai representative.

A Jan. 4 Automotive News report however said the Ioniq will have better highway fuel economy than a Prius, according to Yang Woong-chul, Hyundai’s global R&D chief.

This report highlighted Hyundai’s hybrid system architecture with one-motor, one-clutch system paired to a 1.6-liter GDi engine with 40-percent thermal efficiency – a number Toyota boasts of its 2016 Prius as well.

“Our hybrid is a better fit for American driving situations,” Yang told Automotive News near Hyundai’s R&D center. “When it is announced, the whole world will be surprised.”

Hyundai was not willing to discuss further, but as mentioned, Korean fuel economy tests are very close in results to U.S. tests, and may even err ever-so slightly more conservatively.

So, discussing what fuel economy figures cars get there is more relevant than, say, mentioning how they fare in wildly optimistic tests in Japan, or even Europe, for example.

Facts known to date are the U.S. market non-Eco Prius in the majority of trim levels gets 52 mpg under EPA rules, and the Korean market Ioniq with 15-in wheels gets 52.7 (22.4km/l).

The comparison appears close, but Hyundai says it is not otherwise commenting on U.S. numbers.