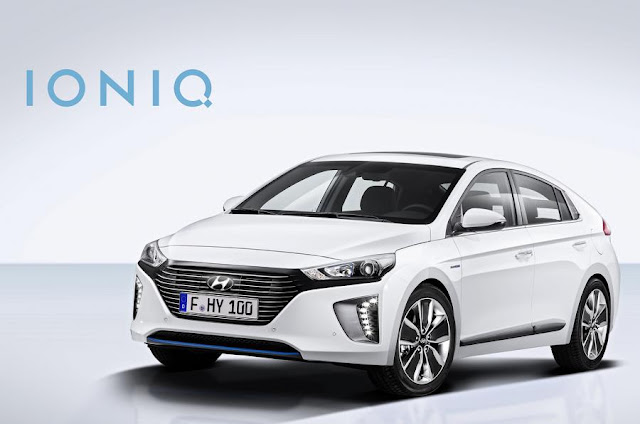 Sporting a bold front-end design that’s been given more latitude than most Hyundais – which stringently adhere to the company’s ‘fluidic design’ styling language – the IONIQ will be revealed for the first time in Korea this Thursday (January 14).

Making a visual statement without resorting to the polarizing sort of design presented by its direct rival, Toyota’s latest Prius, the front-end brings a touch of (sister company) Kia with a large, single-frame black grille that blends into over-sized wrap-around headlights.

The rear-end doesn’t have the maturity of the frontal design, while interior images of the IONIQ appear to be obtained via official sources, unless the spy photographer snagged the keys to the vehicle and threw a white sheet over the car in the underground car park.

The instrument panel appears to adopt full digitization, doing away with traditional analogue gauges. There’s also a pair of touch-screens to fiddle with and the car gets split/folding rear seats too.

Overall, Hyundai’s first global hybrid model has been penned to look futuristic enough to appeal to a specific customer, while being less controversial than the fourth-generation Toyota Prius, which is due on sale in Australia within a month or so.

The IONIQ has a clear directive – steal sales from the Prius – and it will be available to Australian motorists in the second half of this year, when pricing will be competitive with the world’s top-selling hybrid.

While the Prius has a CVT automatic transmission and a 1.8-litre petrol engine paired with an electric motor, the IONIQ will get a 1.6-litre engine and electric motor hooked up to a dual-clutch gearbox.

Although Hyundai is yet to reveal how efficient its new green halo car is, the company has promised “world’s best hybrid efficiency” which means it will have to consume less than Prius’ expected 3.2L/100km
.
Hyundai has been on a drip-feed crusade since it first announced the name of its Prius fighter in December, with teaser shots of the interior and exterior following.

These spy photos show the Korean giant is serious about taking the fight to the world’s biggest car-maker, and considering there’s always been a bit of argy-bargy between the Koreans and the Japanese, this is one fight that’s likely to go the full 10 rounds.