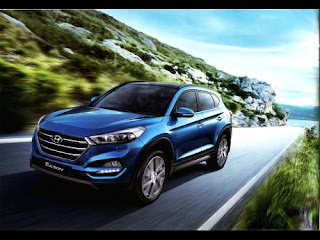 I'm not quite sure that the length of time I was at the steering wheel of a 2016 Hyundai Tucson last Tuesday would qualify it for the exalted status of being called a test drive. From the brand's new Jamaican headquarters on Balmoral Avenue, off Half-Way Tree Road, I got a grip of the vehicle within about 50 metres, then took it up Cargill Avenue en route to Barbican Road, over Jack's Hill, down through Cherry Gardens and back along West King's House Road to Hope Road and back to base.

Total time spent in the electronically adjusted driver's seat - forward and back, a twitch of the right fingers for an ultra-smooth adjustment to the desired height and distance from the leather-wrapped steering wheel - less than 30 minutes for the entire journey. However, the totally redesigned Tucson's most endearing quality was apparent from my less than a minute in the passenger's seat, before exchanging places with my instructor for the trip. He took the right-angled corner from Balmoral on to Ballater rather quickly, especially for an SUV.

I did not feel myself listing in that all too familiar SUV body roll and, behind the steering wheel, found out that even someone who is not the greatest driver around (a in I) can handle the Tucson with confidence - because it handles excellently. Superbly, in fact.

The enjoyment increased going up Jack's Hill and, confidence growing, I relaxed more and breezed through the descent. I was comfortable enough to 'try a ting' - go closer and faster to one end of a car sticking out in the road than I usually would, then, with a flick of the wrists, move it nimbly to the right and then back on to the left. A minor thing for some, a significant manoeuvre for me. The handling was decent in the normal and eco-driving modes, shifting on the fly done by pressing a button conveniently located to the right of the shifter. Sport mode gave the Tucson more pep, but running through the modes going uphill and then coming almost to a stop and pressing the right foot firmly while in sport mode showed it is not going to win any high-performance prizes, with its 2.0 litre gas engine.

But it is not supposed to. It is an SUV, intended to carry five persons in comfort and confidence looking down on most mere mortals, and that the Tucson does very well, while having a pleasant exterior (the back end is especially attractive and the gleaming silver of the front grill is not overbearing). I did not sit in the back, but the ample leg room was clear. Rear air-conditioning will make the ride there even more comfortable, and dual cooling/heating gives independence of ambiance up front.

There are the expected comforts, bells and whistles - steering mounted controls, Bluetooth connectivity, fuel economy digital readout, charging port in the trunk (which has decent space), decent sized screen for info and entertainment. We did not pump up the stereo, but it was more than adequate at low levels - levels which also showed that cabin noise while driving is low. I am always gung-ho for a full seat belt, with trunk hook, for the third person on the back seat. It also makes putting in a child seat and being able to keep an eye on the little one that much easier. The Tucson also comes with a full-size spare and alloy rim. No need to drop the style if there is a puncture.

If there is a downside, it is the plastic on the dashboard, which could be a bit more upscale.

A delightful feature on the test model was how the 4wd is engaged. The Tucson adjust to the road conditions and applies the extra grip as required, taking that extra responsibility from the driver in what might be a high-stress moment, or things may simply happen too quickly to adjust in time.

As is the norm for motor-vehicle lines, the 2016 Hyundai Tucson comes in various trim levels - with attendant prices. So while the test model's upholstery was adequate and comfortable, it was not plush. For that, plus a sunroof, you have to go top of the line. Whether or not you need to is up to personal taste - and pocket.

The race is on to deliver creature comforts, fuel economy and styling oomph in the mid-size SUV category, where there is the highest demand in Jamaica. With its restyled, enlarged 2016 Tucson starting north of $4 million, Hyundai has upped the ante in a serious way.