A slightly down December didn’t stop the Hyundai brand from having its strongest year to date in 2015 after moving 761,710 vehicles in the U.S., a 5 percent gain from 2014.

The news was just as good at stablemate Kia, which tallied its best annual sales ever with 625,818 vehicles. Kia’s 2015 sales boost was good for a 7.9 percent gain from the previous year.

Kia, which closed 2015 with eight straight months of sales records, saw December sales jump 19 percent on the strength of the Optima, Sorento and Soul. 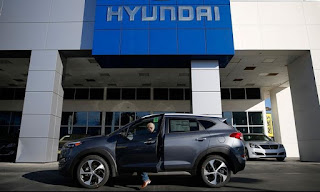 Hyundai’s December was a little slower than the previous year as sales slipped 1.5 percent. Elantra sales dipped from 18,860 in December 2014 to 14,242 last month.

The Tuscon was a bright spot for the brand in December after recording a 167 percent sales increase. Hyundai sold 8,311 Tucsons last month.

Derrick Hatami, vice president of national sales for Hyundai Motor America, said in a statement: “Hyundai once again experienced a record year and the CUV segment proved to be the star.”