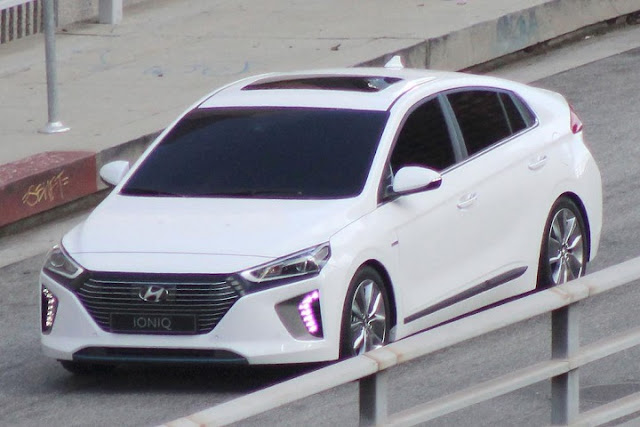 There are loads of hybrids on the roads these days, but the Toyota Prius is still the king of them all. Hyundai hopes to give it a run for its money with their upcoming Ioniq hybrid. These pictures show how much it looks like the car it hopes to beat.

According to Autoexpress, these spy shots show what will be the world’s first production car with gas-electric hybrid and plug-in powertrain options. It was caught doing a promotional shoot ahead of its big reveal this coming January.

That reveal will likely come at a special event in South Korea before it heads to the Geneva Motor Show in March. The look is very reminiscent to the Prius, which makes sense. Both are designed with aerodynamics at the top of the list so that distinctive Prius shape is here, slightly altered, but still visible.

It was expected that the Hyundai Ioniq would be a hatchback, but these spy shots seem to show a 4-door with a trunk. The Ioniq is based on a new platform designed to house its lithium-ion batteries. These will help save fuel on the hybrid equipped with a 1.6-liter gas engine and provide all the power to the wheels on the fully electric. Expect to see the Ioniq for sale next year.