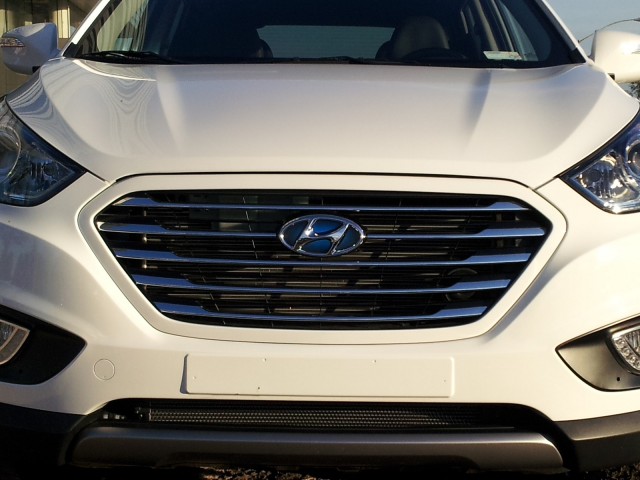 Hyundai Tucson Fuel Cell crossovers were first delivered to customers in Southern California last year, and almost 100 vehicles have been leased since then.

But now Hyundai faces competition from two dedicated vehicles that haven't been converted from existing models.

Unlike the Tucson, the 2016 Toyota Mirai and 2017 Honda Clarity Fuel Cell ride on their own platforms, with their own distinct styling.

Using an existing platform helped expedite the launch of the Tucson Fuel Cell, but now Hyundai is considering a dedicated fuel-cell SUV to compete with the Toyota and Honda, reports Autocar.

"We will launch a dedicated vehicle," said Sae-Hoon Kim, head of fuel-cell research for Hyundai and sister brand Kia.

However, he wouldn't confirm that this vehicle would necessarily be an SUV or crossover.

He did say that Hyundai is aiming for a range of 500 miles, which would probably translate to around 400 miles on the more stringent U.S. EPA testing cycle.

That's still a major boost over the EPA-rated 312-mile range of the Mirai. The range of the Tucson Fuel Cell has been quoted at 265 miles.

Kim wouldn't say exactly how Hyundai planned to achieve this impressive feat, but the carmaker does expect to glean certain efficiency improvements by switching from the converted Tucson to a dedicated platform.

This will allow engineers to build the body around the fuel-cell powertrain, making greater allowances for things like cooling.

Still, achieving a range more than 100 miles higher than that of the Mirai will take some doing. Hyundai may have to fit larger hydrogen tanks than its rivals.

A Kia fuel-cell car has also been discussed as part of Hyundai's green-car expansion plans. It's likely that this model will share its underpinnings with the Hyundai SUV.

And while some automakers tend to focus their efforts on either hydrogen fuel-cell or battery-electric cars, Hyundai will emphasize both.

The Korean firm also plans to launch the Ioniq, a Toyota Prius-fighting hatchback that will be offered with hybrid, plug-in hybrid, and battery-electric powertrain options.

That vehicle will debut in Korea next month--but without official confirmation, it's hard to say when (or whether) Hyundai's next fuel-cell vehicle will actually appear.