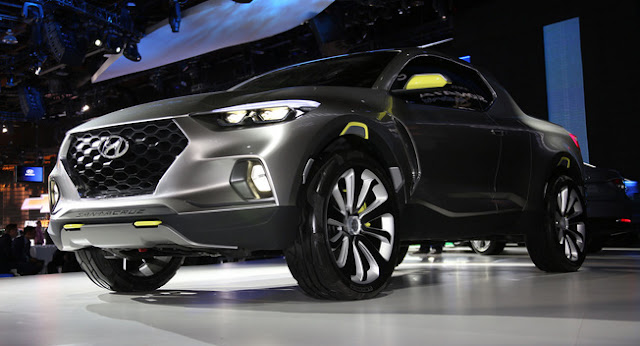 "We're waiting more for an announcement than we are for an approval, right?" asked Hyundai Motor America chief Dave Zuchowski, speaking to Australia's Motoring at the Detroit Auto Show.

The Santa Cruz concept had been well received following its debut in Detroit a year ago. Hyundai's US division has voiced enthusiasm for a production model, though the decision rests on the shoulders of its Korean board.

"Our timing is not crossing our fingers and waiting for approval, it's trying to figure out when we're going to announce it," Zuchowski said.

The light-duty pickup is aimed at 'urban adventurer' millennials, promoted as a crossover with a pickup bed. A production edition will presumably be toned down, though its styling will likely be unique compared to the Chevrolet Colorado and other midsize rivals.

The concept was presented with a 2.0-liter turbodiesel engine that delivers 190 horsepower and 300 lb-ft of torque, however a US-bound production package will presumably be offered with a gasoline engine.

"Santa Cruz is intended to attract CUV [SUV] and sedan buyers who are seeking greater utility, without the compromises that traditional trucks often require," Zuchowski added.

The company has not yet outlined a launch window or estimated pricing for the pickup.